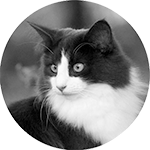 Iris soon needed a new playmate, because the old house cat was not so fond of her games. So as it turned out I had to start looking for a “Doris”, earlier than I had planned. Once again,  I found my cat in Denmark. Sakeena Elkington in Copenhagen had this beautiful baby, and I’m so happy and grateful for meeting Sakeena and her trusting me with adorable Doris.

Amélie – named after Sakeena’s daughter, goes by the name Doris and has a completely different personality than Iris. It’s like you can tell she comes from Copenhagen and Iris from the country side in Jutland. Doris is fast as the lightning in both thought and action. She is a funny cat, but also very cuddly and snuggly. She has a slightly “wilder” expression than Iris and was therefore called “the angry girl” as a kitten. But she is not at all “angry” just funny, inventive and whimsical.

Doris has also been successful at shows. Just like Iris she became Champion in June 2018 when she just turned one year. In August 2018, she became International Champion and she has earned certificates at every show since she entered adult class.

She quickly advanced to classes where she meets older and more mature and outgrown competitors. She is a typical classic Forest Cat with good technical points, but she could need more body and substance. We therefore decided to give her some time to mature and grow, and to let her have a litter.

Somewhat typical for her character, you could say that Doris herself chose her first partner… At the show in Vårgårda in May 2018, she managed to escape from the cat carrier when I left it to check in. She quietly walked right out of the carrier (Iris was of course sitting still in it) and just started to stroll around.   Thankfully Katri and Patrik Halemark from SE * Duvesjön’s caught sight of the runaway and picked her up before she went on to explored the entire exhibition hall. Katri and Patrik were attending the show with the absolutely adorable young guy Lisselback’s Feroz. It turned out to be a very simple choice of partner for Doris.

After some consideration Doris was neutered in February 2020. I decided not to continuing the breeding on her. Doris keept her small size and petite frame also one year after her first litter.

She now enjoys life free from the responsibilites of young kittens. In the spring of 2020 she moved to a new wonderful home togheter with Avivaz Odin, one of Iris’ kittens from the Norse Litter.